Obama temporarily barred from Air Force One due to durian-breath

SUARA RAKYAT
1 Comment
Lawatan Obama
Tuesday, 29 April 2014
KUALA LUMPUR — US President Barack Obama, on-route to the Philippines after completing a 3-day visit to Malaysia, was denied entry into the presidential plane Air Force One by the Secret Service after his durian-tainted breath triggered the aircraft’s hazardous gas sensors.
Mr Obama, who had just enjoyed a large serving of the thorny fruit known for its pungent, strong smell yet delicious taste, was stopped by his own security personnel at the aircraft door and asked to return to his armoured limousine and taken to a nearby airport VIP lounge where he could ‘decontaminate’ his mouth.
A Secret Service spokeswoman said that this drastic measure was unusual, but needed to be taken for the safety of the entire plane, as the Asian fruit’s overwhelming smell, quoted by some as ‘reeking of garbage stink’, could overcome the other personnel and endanger the flight. 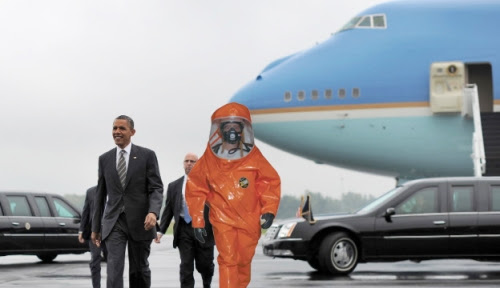 STRONG STOMACH: Obama being escorted away from Air Force One
“We are truly sorry to do this to the Commander-in-Chief, but we have strict rules about toxic smells on our flights,” said the spokesperson who declined to be named. “Our job is to ensure the security of the president, but if he poses a danger to himself by consuming such thing, we have to make a stand.
“We can’t have our pilots or other staff suffocating just because Mr Obama says ‘Hi’ to them, unleashing the smell of hell unto them. Heck, I don’t think even our delicate electronic instruments could withstand such a rancid scent. A couple of his security details had to be taken to the emergency room just now when he flashed his grin at the crowd before we left the hotel,” she said.
“So, unless POTUS is willing to spend the entire flight to Manila wearing a biohazard suit, we simply cannot allow him on the plane. No way.” NOT FOR EVERYONE: The ‘musang king’ durian
Met at the lounge, Mr Obama said that he could not resist having a go at the durians he saw by the side of the road as his entourage drove by, as ‘it brought back happy memories of his growing up years in Indonesia’.
“I was just enjoying the ride, Skyping to Michelle and the kids when I saw it — a huge, beautiful pile of Musang King durian being sold by an old Chinese fellow,” said Obama, in between chewing spearmint gum and gargling Listerine vigorously. “Suddenly my head was filled with all those sweet times I spent with my buddies in my mom’s village just outside Jakarta in 1967. Jumping into rivers buck naked and picking fresh mangoes and rambutans at Farmer Wak Djomo’s orchard. His durians were just divine. Golly, I LOVE Malaysia!
“I’m sorry if I caused a few hours of delay, but look, I’m the Chief. I just had to get me some.”
The entourage made the impromptu pit stop where the president spent about half an hour eating 3 durians before continuing on his journey. The flight to Manila is expected to resume in six hours, after getting clearance from Hazmat personnel.
The durian seller, Mr Denny Lim, 67, said that while he was initially surprised by the VIP visit to his fruit stall, he felt honoured and glad to see a durian lover rediscovering his roots.
“At first I thought I was in trouble with polis one,” said Mr Lim. “The big black cars passed by with polis bike and all, then they all stopped and reversed. These big, big white men came and surrounded me, and then this black man came, bought 2 durians, squatted beside me and started opening them. He looked like he hadn’t had durians for years, so I kesian and gave him one free. I think okaylor, we must treat tourist very nice-nice one. Visit Malaysia Year what.
“But he paid with US dollars, I said I got no change in US dollar, so he told me to keep the 100 dollars,” said Mr Lim smiling.
While Mr Lim is happy with the president’s durian indulgence, it is said that some others may not be as pleased. According to some other unverified sources, the order to quarantine the president came all the way from Washington DC — the First Lady herself.
“She was on video chat with him when he made the decision to make the durian pit stop,” said the source. “He didn’t tell her why he had to drop her call all of a sudden, but she saw his face, and she knew. She had seen it before when the First Couple visited an Asian store in Texas last year and chanced upon a pack of frozen durians.
“She made the call to the Secret Service with specific instructions to ‘not let POTUS in the plane until he gets rid of that wretched breath’, and between offending the president or pissing off his wife, we knew the better option.” sumber
Tweet

This is a HOAX:

Back to top!
Copyright 2013 Apa Yang Tersirat - All Rights Reserved - Powered by Blogger